In the 1960’s a German man named Walter Linick came to Opalton with his German mate Albert Reece in the search for Australian Boulder Opal. It wasn’t until sometime later that the German migrant, would earn the nickname of Wally the Wombat.

The pair worked at the Big Old Diggings near where the old town of Opalton was situated. For some reason the pair split up and Albert went to Maynesideto mine for opal. Wally on the other hand stayed around Opalton for most of the time. He did try his luck down at the Old Boolbie mine on the edge of the Swords Range. He would always dig out shallow holes and he was never able to find any payable opal. This is how he earned the nickname Wally the Wombat

The colourful character owned a Holden ute but because of the rough country and channels he had great difficulty getting to and from the old mine. Wally, like Albert was a very strong man. He was able to dig lots of shafts with hand pick and shovel. Despite his hard efforts, he never seemed to find any opal. Wally would often be seen using one or two divining rods to find the level. He also claimed to be able to tell the depth of the level by holding one divining rod in his right hand. Depending on how many times the rod would move up and down, would indicate to him the depth in feet where the opal was sitting.

Wally use to live in a bulldozer cut out area near the Old Conways Mine. He covered the middle section of the cut with galvanised iron on a timber frame work. This kept him protected from the harsh elements of the sun and rain but if there was a heavy down pour the water would run straight through the dirt floor of his camp. 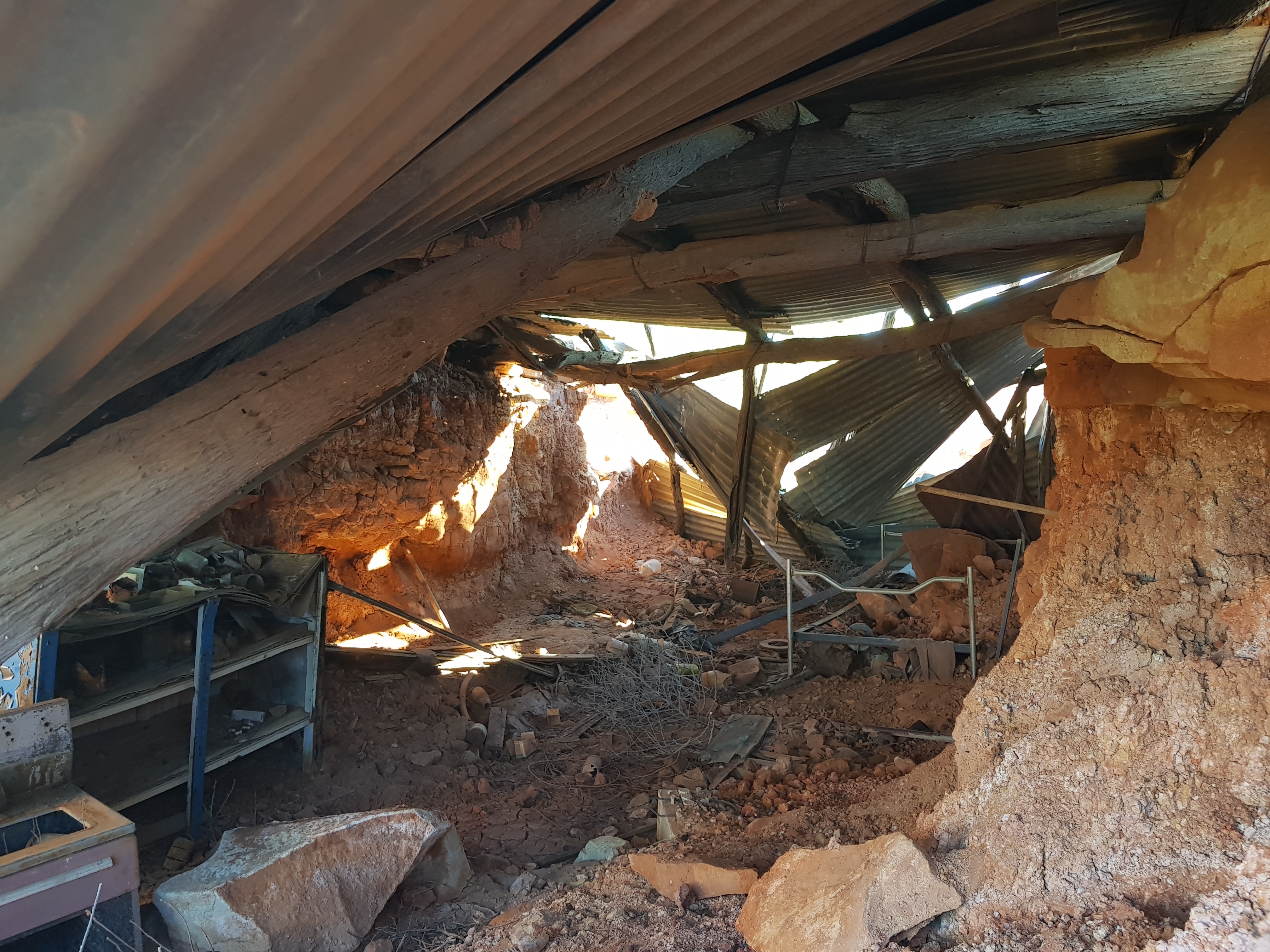 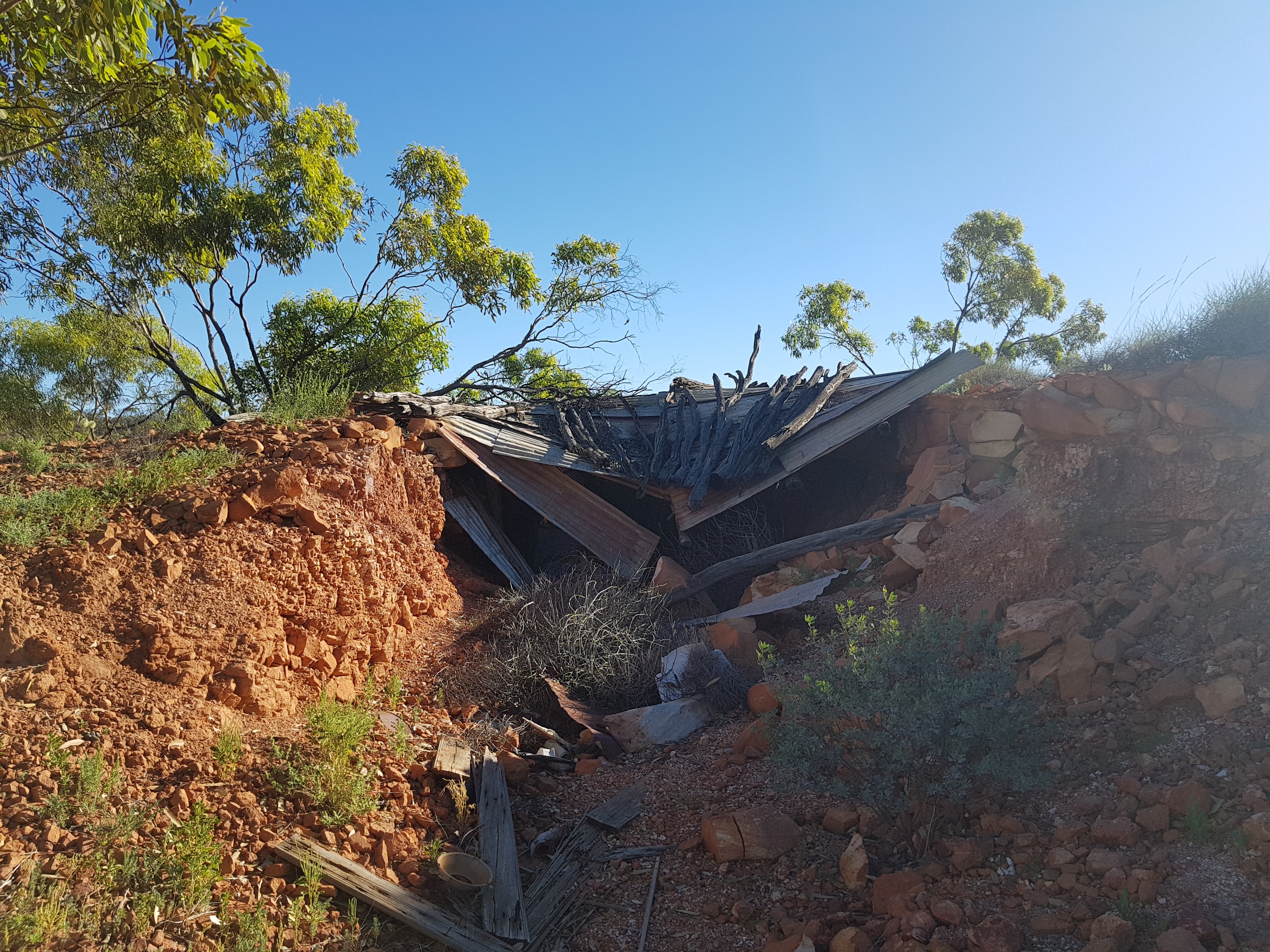 Wally shared his humble abode with his Missus, Lizzie. Lizzie was Aboriginal and had an excellent eye for finding opal chips. When they would come to town for their groceries, she would make chip jars to sell to the tourists in Winton. Lizzie would sit down on the footpath outside the shop waiting for Wally to come out with the tucker.

Wally would also try his hand at painting, with landscapes from the Northern Territory with hills and white gum trees. He was a good man and would always invite you in for a mug of coffee.

Unlike Wally, Albert reportedly mined some good quality opal from a drive he dug out underneath a hill near the Old Yellow Jimmy Mine. He had small tram tracks going into the drive where he used to push a trolley full of mullock, ironstone, sandstone and clay along the tracks out of the drive.

Sadly both of these opal gougers have gone to the big opal field up in the sky, but they will always be part of the history of the Opalton field.

Wally was buried at Opalton and when the grave was being dug, it is believed top rock was struck, so the grave is shallower than normal. In true bush style, they said “Oh well, that will have to do him!” His miners tin hat and a couple of tins of beer were placed on the coffee in case he got thirsty. Wally would have really loved that gesture.

I would like to thank the legendary Ron McKenzie the author of Sweat, Tears & Blood Red Opal for his assistance with writing this article. If you would like to purchase a signed copy of his book for $25, please send an email to sales@wintonopalgems.com

Proud member of the
Opal Association